Why Blind Obedience is Killing Your Business 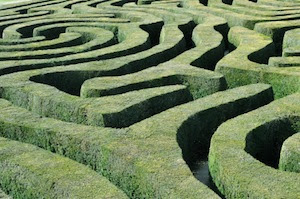 Picture three men racing through a tall hedge maze.
The first man runs off and begins following paths randomly, hoping to stumble upon the exit.
The second man is more methodical. He puts one hand on a wall of the maze and resolves to keep moving forward slowly, never taking his hand off the wall. Eventually, thanks to the rules of topology, he knows he’ll find the outside.
The third man pushes and shoves directly through the hedges in a straight line, finishing in thirty seconds flat and declaring himself the winner.
Did the third man cheat?
Maybe. But he also won.

How to cheat in business

If you’ve read everything in the world about how to make your business better and it’s still not better, I bet I know what the problem is.
If you’re doing everything right, but find yourself unable to stand out from your competitors and are barely able to keep your head above water, I can guess what’s missing.
The problem is that you’re listening too closely. You’re implementing too literally. You’re following too many conventions, societal norms, expectations of friends, “the way things have always been done,” and best practices.
To stand out, you need to think outside the box. You need to play by fewer rules.
Am I really going to advocate cheating here? Well, sort of.
And also, not really.
See, if the hedge maze race I’ve described above was a formally sanctioned Hedge Maze Runners of Northern Michigan competition with a prize purse at stake, and contest rules clearly stating that no contestant may run directly through the walls of the maze, then we can safely call our third man a dirty cheater and say he’s a miserable human being, and so on and so forth.
But what if the three men were racing out of the maze because a child was drowning in the lake outside? Do we call the third man a cheater now? Or do we call him smart and probably even ahero, because he thought of a lightning-fast solution that didn’t occur to the others?
There are two important points I’m trying to make here with my silly maze metaphor:
The rules you’ve been following have nudged you into a box. And if that box is serving you and everything is perfect, then great.
But if life could be better — if you don’t have all that you’d really like in your business, your life, your relationships, your family, and everything else — then it might be time to take a close look at those rules and see which ones you can start to disobey.

How to be crazy in business

If anyone thinks I’m going to suggest cutting out the middlemen in the wealth-acquisition chain by robbing a bank, relax. I don’t want anyone to do anything stupid.
Quite the contrary. I want people to stop doing stupid things, like taking the long route instead of the shortcut simply because the map says they should.
I recently heard from a man who had a job in the city.
He hated his job, but he had to have the job so that he could afford his house. He didn’t like his house much either, but it was all he could find that was close to the city. And he had to be near the city to keep the job he hated, so that he could afford the house that he didn’t like but had to keep because it allowed him to keep the job he hated.
So he quit the job and moved to the country, where the land was cheap, and became a freelancer, working remotely for a lot less money. His old job was an impressive, professional job that he had worked hard to get, and everyone thought he was crazy for throwing it all away, going independent.
But he didn’t think he was crazy.
He was making less money, but because of his new, lower cost of living, he was netting much more. He’d found a way to make less money and have more money, which is just about the easiest way ever to get a raise.
All of the most successful people do things that others call crazy, because innovation always comes before genius, and innovation is — by definition — always new. If you’re the first person in your group of peers to do the most brilliant thing in the world, your peers will still think you’re crazy because you’re breaking out of step. But that’s exactly what’s required to be successful.
Look at Steve Jobs.
Look at wacky old Albert Einstein.
I even know this lawyer dude who gave it all up to start a blog, and people thought he was crazy, too. (Only, he really is crazy. Seems to work for him, though.)
Want to really make a change? Then you need to look at what you’ve always done and what most people do and ask if there’s a better way. You need to ask if you want to keep playing by the rules that don’t serve you. You need to be willing to be called “crazy.”

A primer in entrepreneurial disobedience

I’m hosting a webinar on March 2nd that’s all about learning to identify, question, and (if necessary) break the rules that are stopping you.
It’s called Breaking Rules for Fun and Profit: 21 Lies About Business, Money, and Life That You Don’t Even Realize Are Holding You Back, and What To Do About Them, and you really should attend.
Here are a few of the 21 lies I’m going to talk about:
None of the above is true. If you’ve been mistaking lies for the truth, you’re cutting off vast areas of possibility.
Be sure to sign up, and try to be there early because it’s first-come, first-served.
You can sign up for the March 2nd webinar here.
But don’t go signing up just because I said you should. That would be entirely too obedient of you.
About the Author: Johnny B. Truant just released his novel The Bialy Pimps despite the fact that it’s totally crazy for a business and human potential blogger to write a novel about fame and bagels.
Email ThisBlogThis!Share to TwitterShare to FacebookShare to Pinterest
Labels: Strategy