Harmony Amid Chaos: Another Brand of Brotherhood in Egypt 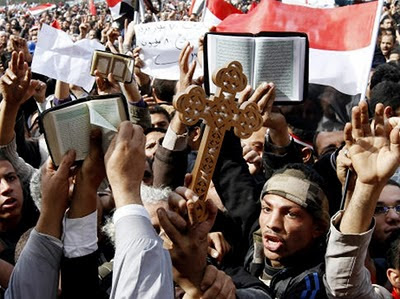 As the world gazes upon and analyzes the uncertainty in Egypt, much focus has been given to the radical "Muslim Brotherhood" group. Well, there's another Egyptian brotherhood that's caught my eyes recently.

Last week I was touched by a picture posted here on Revelife in which a group of Egyptian Christians surrounded their Muslim countrymen so that they could safely worship/pray amid the chaos in the area. And I was just as moved several days later by other images showing Egyptian Muslims returning the favor, joining with and protecting their Christian countrymen in worship. So indescribably beautiful.

I once read about a similar situation somewhere else in the Middle East. I want to say it was in Iraq, but I'm not entirely positive. In the midst of Christianity vs. Islam, Christians and Muslims cohabited a city together with no suicide-bombers, no gunshots in the street, no egg'd porches or TP'd lawns -- no conflict whatsoever. Further, the Muslims and Christians in this town would immediately stand up and defend the other whenever outsiders came in to try and disrupt the peaceful community they'd built. 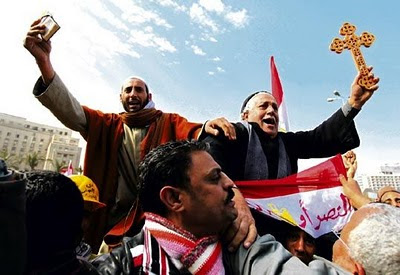 Why don't we hear about these kinds of stories more? It's always bombs here, battles there, and it's all just so disheartening.

I can't stand conflict. Drives me nuts. Especially conflict between Christians, or caused by so-called "Christians" against non-Christians, who don't at all extend the love that Jesus taught and exuded. I hate divorce, despise constant arguments that go nowhere. Why can't we all just get along on this earth? Why can't we all follow this beautiful example of Egyptian brotherhood, arms across shoulders, crosses and Korans within inches of each other with no fists flying?

Lord haste the day when we know nothing but peace for all eternity.
Email ThisBlogThis!Share to TwitterShare to FacebookShare to Pinterest
Labels: Nation Branding, Religion brand